A collection of the works of Sister Bette Moslander now available

“Fire and Passion: the Mysticism of Bette Moslander” is a new book and a labor of love for Sisters Marcia Allen and Gilla Dubé. The book is a compilation of excerpts from Sister Bette’s writings and talks and original chalk drawings from her personal journal, complimented by reflection questions written by Sister Marcia. 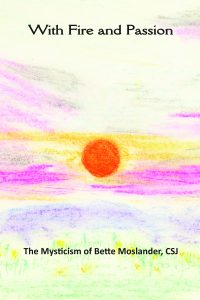 Additionally, the interactive book will contain links to a dedicated website that will offer entire texts of her talks, as well as audio and video presentations.

“We chose the title ‘Fire and Passion’ because these words express the essence of her life,” Sister Gilla said. “The fire, the passion and the mysticism — these were the three descriptors that spoke to me of her life and spirit.”

“Everywhere she went she was always a speaker in demand,” Sister Marcia said. “She had a very charismatic presentation when she spoke and left a legacy of friendship around the world. And everywhere she spoke, people often would ask, ‘Can we have a copy of that?’”

“She would start out with some sort of a script, and then ab lib, but nobody knew that. After she died I decided that I would collect her written and oral works and see what could be made available,” Sister Marcia said. “What we found dated as far back as the 1950s and she was still teaching in 2010. That’s when I realized the task would be large.”

“I kept trying to figure out how to grasp the essence of what she said, without simply publishing volumes and volumes of words. Finally the idea to take excerpts of her talks and make reflection opportunities began to surface,” Sister Marcia said. “I

discovered that Sister Gilla would be able to edit and organize the material. So we chose the excerpts and I created reflection questions for each excerpt. We then organized the material into themes seen through the lens of mysticism: Discipleship, Love, Creative Energy, Vulnerability, Inclusion. Samples of Sister Bette’s chalk art enhance and illuminate the themes.”

Additional support for the project came from Sister Sherryl White, a Sister of St. Joseph of Baden, PA who created a special website for Sister Bette’s works. “The

website makes it possible for the reader to access an entire talk or text via audio or video or the written word. The reference given for each excerpt enables the reader to go to the website and find the whole text or talk,” Sister Marcia said.

“The guiding principle for me, and I’m sure for Sister Marcia, was the desire to honor the legacy of this woman,” Sister Gilla said. “I came into this not knowing anything about Sister Bette except by reputation, her leadership background and popularity as a speaker. I started reading her work and immediately got swept into her spirit – her fire and passion. What’s fascinating to me is that what she wrote in the 70s into the early 21st century is as relevant and prophetic today as it was then.”

“Our challenge was to present Sister Bette’s spirit and depict a true picture of her life’s commitment to the Gospel of Jesus Christ. A critical piece, as least as far as I’m concerned, is not just the excerpts, but the reflection questions that accompany each excerpt. The personal reflection questions that Sister Marcia offers bridge the reader with the meaning and spirit of the text and its implications for today and into the future.”

“We see this book as a personal reflection guide, a retreat guide, a group study guide,” Sister Marcia said. “There are no limits to possibilities in the use of this book. While the majority of her talks were given to women religious of various orders, she also spoke to various lay groups of women and men and priests’ organizations. Any talk she gave illuminated Gospel values and is applicable to any person who believes.

“Sister Bette offered challenge and consolation to individuals looking for hope in ordinary time, and she spoke to that,” Sister Marcia said.

“She was obviously extremely bright, yet what drew me was her tenderness so evident in the texts that I studied. When she wrote, there was such love and such tenderness,” Gilla said. “yet she had a way of challenging the status quo, challenging people not to settle for mediocrity.”

Sister Bette died on March 22, 2015. “Fire and Passion: the Mysticism of Bette Moslander” was printed by Consolidated Printing in Salina, Kansas. To pre-order, use the form below, click our paypal “buy now” link, email retreatcenter@mannahouse.org or call (785) 243-4428. Cost is $20. Shipping and handling is $5 for one book. Add an additional $1.50 shipping for each additional book sent to the same address. Please make your check payable to Manna House of Prayer.  Please add $10 for Canadian postage, plus an additional $5 shipping per book sent to the same address. 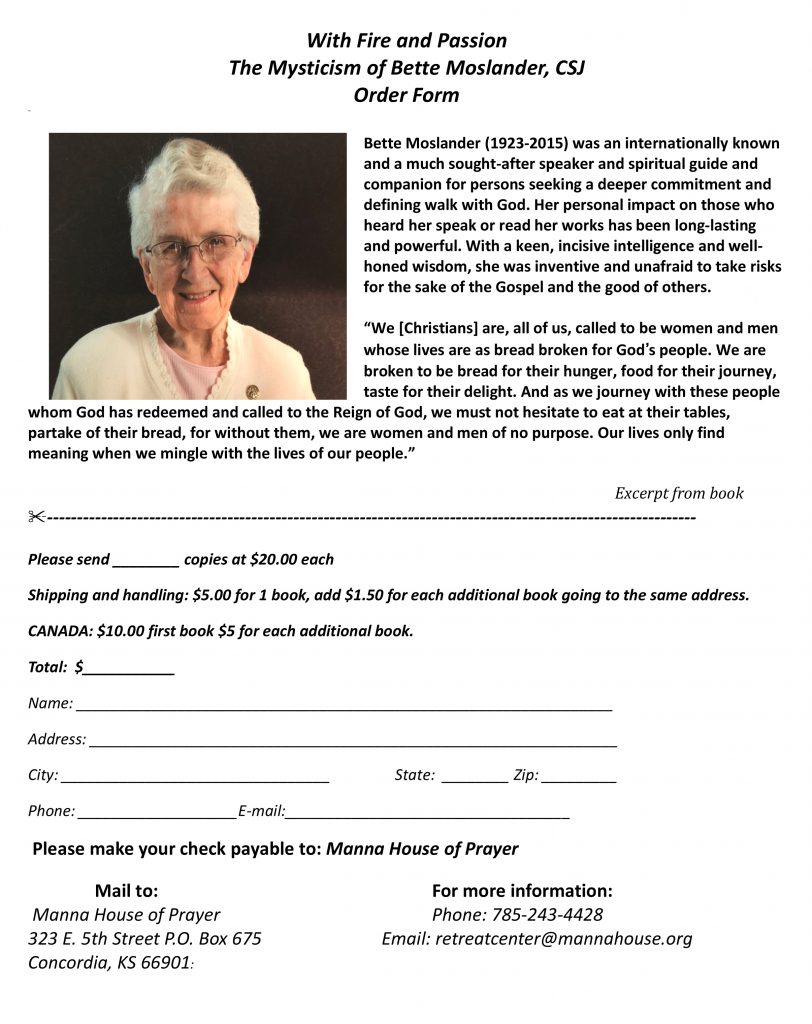 2 thoughts on ““Fire and Passion: The Mysticism of Bette Moslander””