ICE has asked volunteer agencies on the border for more volunteers to help with the current situation. Annunciation House in El Paso, Texas, issued the original desperate call for volunteers. As are shelters in other cities. LCWR (Leadership Conference for Women Religious) sent out a call to all religious congregations with information about volunteering in major cities with shelters there. Our leadership team at Sisters of St. Joseph of Concordia sent all of our sisters an invitation to volunteer if they could. Sister Judy Stephens and several lay people have responded. We will be sharing her experiences in El Paso.

“Day 2: Greetings! Want to tell you a little about today. ICE (Immigration and Customs Enforcement) brought 2 buses of released refugees. Unannounced. The first arrived right before dinner with 43 people. The pizza we expected didn’t arrive for 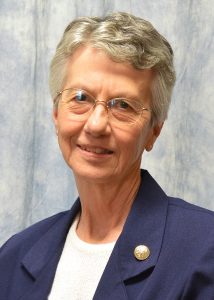 dinner but came tonight!! The refrigerator is full of sandwiches so no problem.
Then began the serious work: some volunteers took down their names & and where they were going in the U.S. for their appointment with an immigration judge. And with which relative were they going to stay. Then the volunteer would call the relative and explain how they could buy a bus ticket or plane fare so they could travel there. Ana and Maria did that work endlessly. Last eve Ana took the four phones used for these calls to her room and still had to answer some. We were short of a site leader today and enough volunteers. After dinner the second bus arrived with another 20 some folk. But thank God, more good volunteers came in. So with those already here we probably have 100 and all available rooms filled.
I was trained in taking folks to bus station and two trips to airport. It’s tricky b/c most folks have to transfer. So You have to make sure they understand. My last trip was a 23 yr old woman carrying a nursing baby and a small son and her duffle bag. Going to Houston, changing planes. She was so brave.
On top of all this we woke up to several inches of snow. Mountains gorgeous but too cold for arriving folks and us!
One last story. A young man and his small son entered by crossing the Rio Grande walking across the river where it’s shallow. They arrived here still wet to their knees after two days. Most children are coughing and some adults as well.
All in all it is a powerful experience.
Enough for now.
Hope all of you are well.”
Sister Judy

Several of you have asked how Sister Judy Stephens and the laypeople volunteers who went with her are doing at the border. As you may recall, ICE requested that the volunteer agencies in El Paso increase their volunteers, and Sister Judy and her friends responded to the call. She has been very busy, but took time to write very late last night to let us know about her status. I will be breaking this into several sections today.
Now …. in Sister Judy’s words:

Days have passed since I wrote. Both the weekend and the New Year were slim with staff and volunteers. And every day ICE (Immigration and Customs Enforcement) brought a bus load. The smallest was 29. So, it has been busy and a bit intense.

In addition, most small children have colds, coughs and sometimes fever. Sister Mary Kay Meagher is the nurse on duty on first shift. All she has are OTC medications, but she evaluates well what needs to be done. Yesterday she sent a two-year-old child with her parents to Providence Hospital ER. She was examined thoroughly and eventually able to go home. And doing fine today.

She and her parents came from Nicaragua. They said that the situation in Nicaragua is serious. The Ortega family has a strict hold on the country and if you register resistance or non-agreement, you are labeled a terrorist and imprisoned — or found dead in the ditch somewhere. They spent at least five days in detention — men in one facility, women and children in another. The men slept side-by-side on the floor in a small room. Some had to sit and wait their turn for space. The bathroom was in a corner of the same room. Can you imagine?

One night we took Cindy and her one-year-old daughter to the airport to leave on a 5 a.m. flight. En route she told us she and her daughter left Honduras with her 9-year-old old brother on Nov. 8 with the Caravan. At some point they separated out and came to the border at El Paso. At that point, Immigration separated her from her brother and she has not heard from him since.

Our group of volunteers is really good. There are least six sisters of different congregations. There are two older Franciscans Sisters who have the breakfast routine down to perfection! Neither can hear very well, so they are fun to be around. A Maryknoll Sister was sick yesterday and will probably need to go stay with her sisters here in town for awhile.

I help wherever needed, but mostly driving folks to Greyhound bus station and the airport. I always accompany them to get their tickets, pass through Immigration and security. And TRY to tell them how to transfer to another flight or bus the best I can. I can tell some of them have probably never (or rarely) even ridden in a car! Much less flown in an airplane!!

I’ve been having a recurring reflection I would like to try to describe. It’s about the life we are able to live here in the United States and those who are forced to live at the survival level. This has been most visible at the airport — to see the clothing, the styles, the luggage people have including flying with their pets in lap. I can tell you the folks we travel with are a striking contrast!

In addition there’s been a cloud hanging over us that the administration is planning to make some big decision that’s going to affect everyone. We’ll keep watching.
Thanks for your prayerful support. We surely feel it.

Greetings. A short email update that includes my family!

On Thursday, we received 27 people. That evening on the news there was a large section on Annunciation House.  Ruben explained that they were at capacity in the 11 (or 14?) shelters he oversees, and that if he doesn’t receive more volunteers he will need to close some of them.

Also absolutely remarkable is the generosity of the local El Pasoans —they supply all the meals three times a day. Churches, groups, even restaurants!  We’ve certainly been well fed.

On Friday, we received 45 more, so things were really busy. In the middle of it THE MAYOR’S WIFE showed up with a cameraman. She was here for a long time playing with the children and visiting. And being filmed. Of course we had to call Ruben to see if that was okay. He said yes, but that the children’s faces had to be blurred. Apparently she came in order to give support and to seek help.

Another busload came again today. There’s another child in the hospital now with dehydration and malnutrition. They have bus tickets to Colorado this evening. Hope they are able to go.

I’m still thinking about the survival level folks come on and how that has to shift our priorities if we are going to get anywhere.
Blessings to all of you … Judy

What’s happening?? ICE (Immigration and Customs Enforcement) hasn’t brought a single bus load of folks since Sunday! Maybe it’s because of Trump’s address last night? Or maybe because he’s visiting the border at McAllen today and they want to keep things quiet and hidden? Who knows?
Last night Annunciation House closed one of the motel shelters and brought three families here. So we probably have 25 to 30 folks now.
Well, things change quickly. While writing this, a phone call from Annunciation House told us ICE was bringing 35 refugees today sometime.
There are fine volunteers here. Besides the four of us, there are six or seven IHM Sisters and Associates here from Monroe, Michigan. We are divided between the two shifts. Later I’ll post pictures of them.
So many precious children here! They are amazingly friendly. And how they love to play. I’d sure like to take their pictures! (Not allowed, of course!)
Jan. 11, 2019
It’s hard to believe that this is our last day of being here. You quickly begin to feel a part of the flow of things. As unpredictable and fluid as they are!
In Ruben Garcia’s last press conference from Annunciation House a couple days ago, he announced that ‘the surge was over,’ and that he was closing two shelters and next week the shelter where we are would be closed.
BUT … last eve we got word that we and the other shelters still open would receive 100 people today! So we are getting ready it will be an exciting day.
Several children have arrived with suspected chicken pox and we had to quarantine them until a volunteer pediatrician came to check them out. Both children were okay and able to travel.
With Trump’s televised address and visit to the border yesterday, it’s hard to sort out what is happening on the ground. How does Ruben know the ‘surge’ is over? Is ICE (Immigration) holding folks longer in detention? Or is Border Patrol going to again refuse folks to enter and request asylum? It’s hard to know. We volunteers continue to wonder and discuss.
My gratitude for being here is huge. I am so grateful for the invitation, the call to come here. I am so grateful to my congregation, the Sisters of St. Joseph of Concordia, Kansas, for their prayer and support. I’m most grateful for Maria Fernanda, Ana and Jason for coming with me and serving by my side.
My deep gratitude for the prayer and support of my friends and my family!
Blessings on your day.
Sister Judy

For those of you asking how to make a donation or volunteer, please contact Ruben Garcia at Annunciation House. He has three or four permanent shelters and another 11 temporary shelters like the one I live and work in. He has done this work for over 40 years now. Here is the information:

While on the website you can see press conferences previously held.